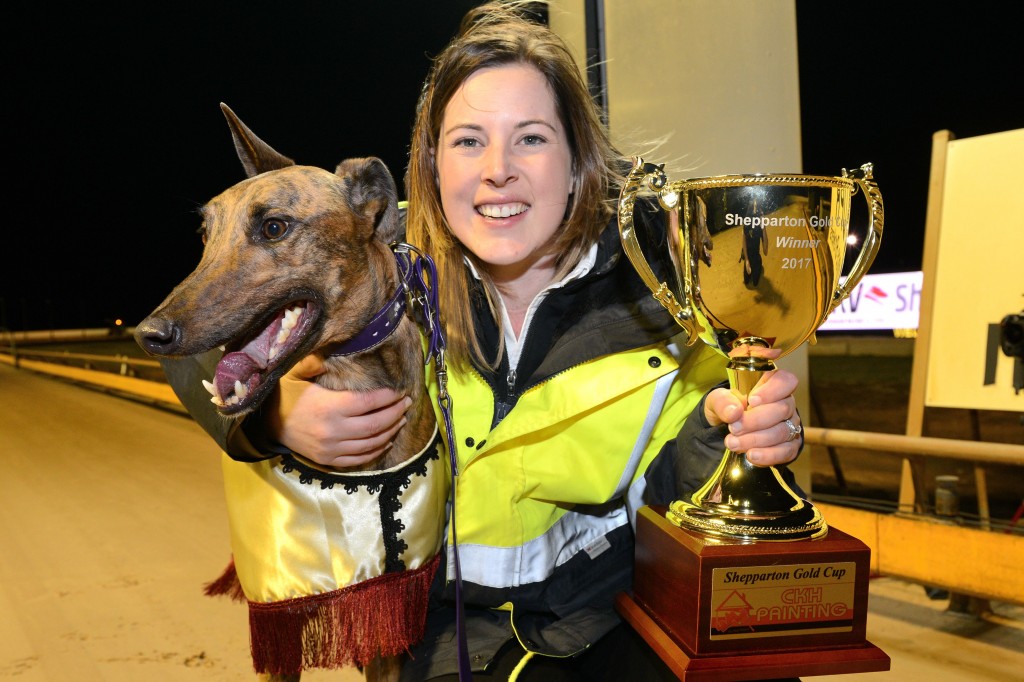 Trained by Brooke Ennis and husband Jamie, Zinzan Brooke was making his fourth appearance in a provincial feature when he edged out Bewildering and Lucky Chap in the $47,000 to-the-winner Shepparton Cup.

The son of Knocka Norris had previously contested the finals of last year’s Ballarat Cup, this year’s Warrnambool Cup and most recently the Bendigo Cup earlier this month, where he started $3.20 favourite but could only finish sixth to surprise winner Landmark.

“He’s made three country cups now and he always wins his heat in great fashion so I’m probably biased but I felt like he was due to win one,” a delighted Brooke Ennis said.

“It was a great field. Country cups are hard to make and they are extra hard to win.”

Zinzan Brooke had won his only two other assignments over Shepparton’s 450m course, a near-record 24.92sec performance in April and a 25.31sec heat victory on Monday, with Lucky Chap, trained by Anthony Azzopardi, the fastest qualifier, clocking 25.16sec.

Drawn alongside one another in boxes eight and seven respectively, Zinzan Brooke ($3.40) and Lucky Chap ($4) duelled for favouritism, with Melbourne Cup hero Ando’s Mac ($4.50) and Bewildering ($5.30) also having plenty of admirers.

Zinzan Brooke began well to be second to outsider Good Girl Sandy ($17.30), but when Zinzan Brooke clipped the leader’s heels approaching the home turn Lucky Chap raced to the front.

But Zinzan Brooke balanced up and finished strongly along the inside to hold out the fast-finishing Bewildering and Lucky Chap in 25.32sec, with just half a length separating the first three across the line.

Zinzan Brooke, which started his career in Queensland, where he won his first seven starts, has now won eight of his last ten and an imposing 24 from 33 overall.

“I thought he was drawn where he needed to be and it turned out that way,” Ennis said.

“He copped a check on the home turn and I thought it put him out of the race. But he’s had a couple of runs over 500m and his strength got him there in the end.

“I really wasn’t sure when they crossed the line but a few people came up and congratulated me and I was hoping he won.

“It’s Jamie’s birthday. He couldn’t be here tonight because he’s at home looking after the dogs but he’ll be so happy.

“We are rapt for the owner (Queensland’s Wayne Thomson) because Zinzan Brooke had a serious operation when he was quite young and he was lucky to survive let alone race, so for him to now be a group winner is an incredible effort.”

The Ennis kennel was denied a feature double at the Shepparton meeting, with Bella Shima running second to Anthony Azzopardi’s Reefton Treasure in the Byers Electrical Cup Night Stayers (650m). Head on finish of the Shepparton Cup, won by Zinzan Brooke (8). The treasure trove on offer on Shepparton Cup night *This article was compiled by Gerard Guthrie and Andrew Copley.