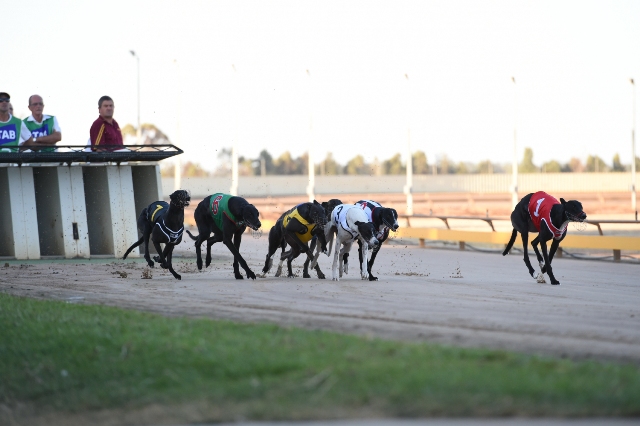 
Greyhound racing heads to Shepparton on Monday night with the highlight being Race 6, a $7,250 feature distance race over the 650m. With a $5,000 first prize it has assembled a nice field and I’m pretty keen on the favourite Jaimandy Hatty (3).

Lightly raced having only had the nine starts, he steps up to the 650m for the first time tonight and I think it will suit him perfectly. A powerful chaser, he has drawn well and if he gets any luck early, he will be challenging the leaders off the back.

If he is then I think he will prove the superior stayer. Here is Jaimandy Hatty’s only win in his nine start career, which was at Sandown three starts ago…


WATCH: Jaimandy Hatty (4) comes from last to win his maiden at Sandown Park three starts ago.

I think the main dangers to him are the Julie Chilcott duo El Chana (1) and Able Chief (5). El Chana has drawn nicely in Box 1 and he should be vying for the front at the first turn.

He will give them something to run down, whilst  Able Chief has drawn poorly in the squeeze but can unleash a big finish and did win well at Bendigo two starts ago. I give small chances to Annabow (6) and One For Liam (8).

On a good night of racing I’m keen on a few at a price starting with Borris Delight (6) in Race 3. He won in brilliant time (25.27) when leading all the way at Shepparton last start.

This race is no stronger and he looks hard to beat and is rated at $5.00 with the Watchdog. In Race 7 I like the chances of Smooth Rebel (1). He isn’t a fast beginner but the key is he has drawn on the rails. If he can get an unimpeded run throughout he has a monster finish and he will be charging home.

In Race 10 I really do like Proven Crown (7), who I think is the pick of the night. A noted wide runner, he looks ideally drawn in box 7 and should be able to wind up strongly midrace and will be hard to hold out in the straight. He has been in terrific form recently. Watch the video below to see his win last start.

I hope this has helped you find a winner or two tonight. Until next time, good luck and good punting.

WATCH: Proven Crown (7) scores a convincing win at Shepparton earlier this month in 25.33 (Best of Night).
< Previous
Next >